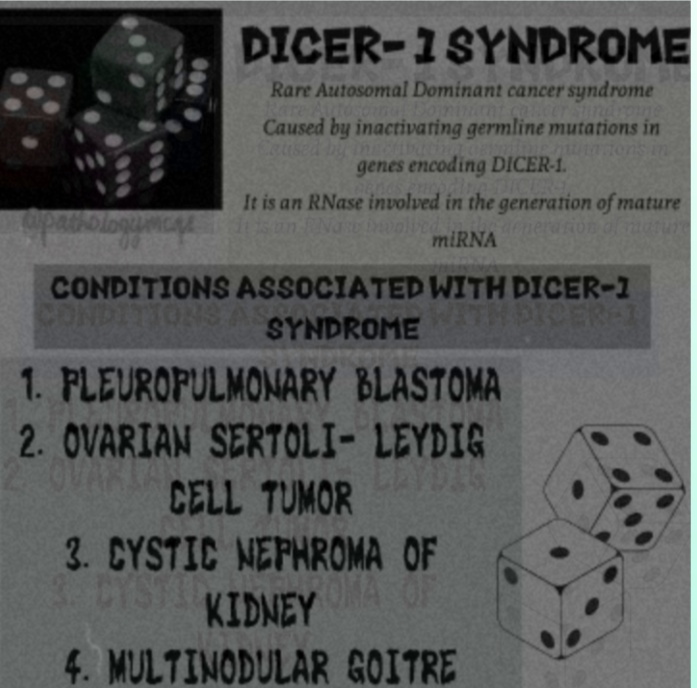 DICER-1 SYNDROME IS A Rare Autosomal Dominant cancer syndrome Caused by inactivating germline mutations in genes encoding DICER-1. It is an RNase involved in the generation of mature miRNA.

Sertoli-Leydig cell tumor (SLCT) is a rare cancer of the ovaries. The cancer cells produce and release a male sex hormone called testosterone. The exact cause of this tumor is not known

Cystic nephroma is a rare kidney neoplasm belonging to the entity of cystic tumours. It is a slow-growing tumour, which develops insidiously, sometimes reaching a considerable size. The diagnosis is more often accidental (except for mass syndrome in children). It is a benign tumour that may be treated by partial sparing nephrectomy

Multinodular Goiter (MNG) is defined as the special condition of thyroid glands, where there are multiple lumps (nodules) formed.

Medulloblastoma is the commonest childhood malignant central nervous system tumour. It occurs in the midline of the cerebellum

Embryonal rhabdomyosarcoma (ERMS) ERMS usually affects children in their first 5 years of life, but it can occur at older ages as well. ERMS tends to occur in the head and neck area, bladder, vagina, or in or around the prostate and testicles.

Pineoblastoma is more aggressive than other types of pineal gland tumors. Its fast growth usually causes cerebrospinal fluid (CSF) to build up in the brain. This condition is called hydrocephalus. While pineoblastoma may spread through the CSF in 10% to 20% of cases, most of the time the tumors do not spread to other parts of the body.