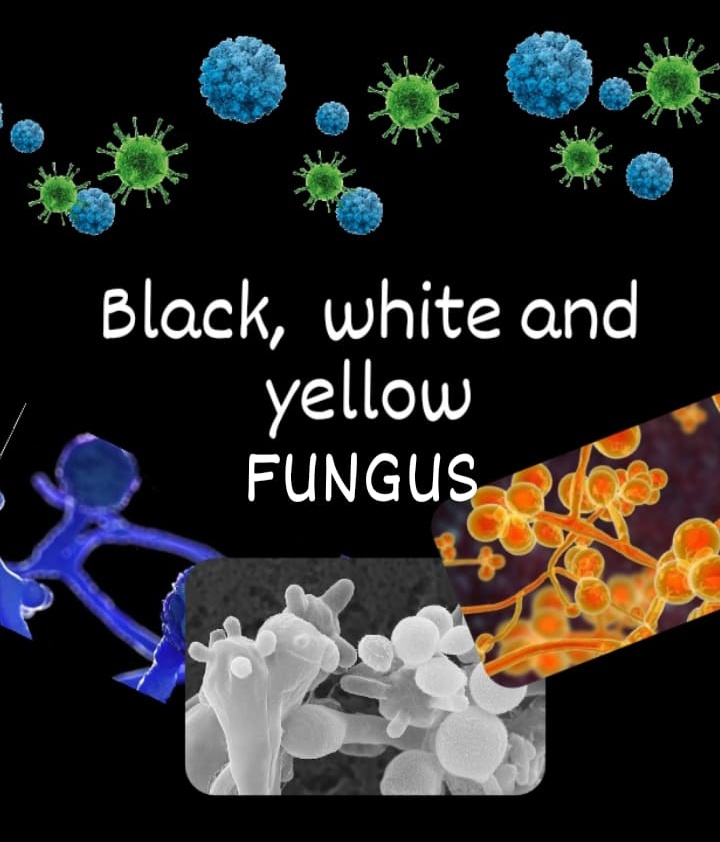 COVID -19 second wave and journalism in India have introduced us to Black,  white and yellow fungus.  What are these originally?  Let’s decode some terminilogy.

Before delving in let’s look at ways to differentiate two major opportunistic infections in COVID-19 patients based on morphology- MUCOR and ASPERGILLUS.

What is being referred to as black fungus?

Mucor is being referred to as the black fungus.

Is the fungus itself black in colour?

No,  in a setting of immunosuppression, mucor grows rapidly causing angioinvasion and tissue necrosis.  This results in a blackish appearance of the affected area,  giving rise to the name.

What is the real black fungus?

Some fungii have excess melanin, also called melanized or dermaticious fungi.  They are the real black fungi.  Moreover,  presence of melanin is not uncommon in Histoplasma spp,  Aspergillus spp (especially Aspergillus niger)  and even candida spp.

What is being referred to as white fungus?

Candida albicans.  This fungus has the tendency to produce patchy white coloured lesions,  hence the name.

What is being referred to as yellow fungus?

Mucor septicus.  This fungus has not been associated with any human infections till now.  It’s identification is still a mystery.

What is the real yellow fungus?

Aspergillus– When cultured, aspergillus has a blackish center due to the melanin, and whitish or yellowish body.

Actinomycetes has a unique feature, pus in this infection has a yellow color due to the presence of sulfur granules.

That’s it for now! Thank you.

For Morphologic differences between Mucor and aspergillus check this out!